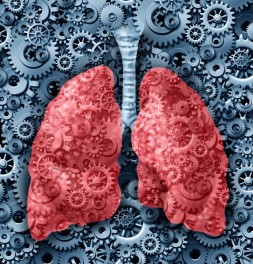 Over the last couple of years, I have become short of breath when walking up steep hills, and have even run out of breath when singing a long phrase or at the end of a sentence. I figured I was just getting older, heavier, slower, but when my sleep apnea was diagnosed the doctor found something else.

My lung capacity had gone down to the point where the drop could be measured.

The next stop on this particular journey is to see a Pulmonologist and so I did. He measured my lung capacity and recommended a chest X-ray which came back with some suspicious shadows at the bottom of both lobes of my lungs.

Off to the radiologist again, but this time for a high-resolution CT. Yes, my friends, these are expensive and since we were still on our deductible for the year it was a large hit to the wallet but worth it since it gave us insight into what had previously been a shadow.

Throughout my life, I have had bouts of bronchitis, sinusitis, and infections of the respiratory system. No asthma or anything like that, but I remember decades when I could expect at least two bouts of bronchitis a year if not more. Then, in 1994, I tipped over the precipice into double pneumonia and was ill for months.

The high-resolution CT revealed that all of that trauma over the years had left scar tissue, non-CF bronchiectasis (caused by past lung infections), and mild scarring left by atelectasis. These showed up as white webby designs in the first and small black holes in the latter when we reviewed the scan together.

I was shocked as you might imagine. This is where Burning Mouth Syndrome comes in, and I will be interested to hear if any of you out there have experienced the same.

The Pulmonologist had immediately put me on a Ventolin inhaler at 2 puffs 3xday when we met the first time. I was doing this and although I couldn’t perceive much difference, the lung capacity measurement had gone up a bit so it was helping. I tolerated it well and so when he recommended adding a steroidal inhaler to it, I didn’t balk.

Symbicort was not my friend. From the first puffs to the last it flared my burning mouth so much that it was not tolerable. I contacted the doctor’s office and said that I could not use it and the nurse took down my information and I stopped but stayed on the Ventolin.

The next day the nurse called me back and said that the Dr. said to stay on the Symbicort and wanted to add a third inhaler to the first two. I was stunned. I repeated my explanation of the BMS flare that had resulted from the Symbicort and she said, “Oh, I forgot to tell him that. Let me call you back.”

Yes, that would be a great idea.

A return call took me off the Symbicort officially and the third inhaler was withdrawn. I had a check-up appointment in two weeks and although the nurse protested she finally saw my logic in canceling something that was set up to check something I was no longer doing. I noticed when I refilled the Ventolin that the doctor had increased the dosage to 2 puffs 4xday, but since it does not have the dramatic effect that the steroid inhaler did, I can live with that.

Do any of you use inhalers? Have you found any effect on your BMS pain when you used them? Chime in on the comments and let us know!

Take care of yourselves if you are on inhalers because, in the time of Covid-19, you may be at more risk of respiratory distress, and keep washing those hands and maintaining social distance.